This week’s most prevalent housing market headlines were quick to mention the abrupt drop in Building Permits to the lowest levels in 2 years.  Other headlines pointed out that it was the quickest move lower in more than 2 years.  Both statements are true.  So is it time to stick a fork in the housing market? Not exactly… 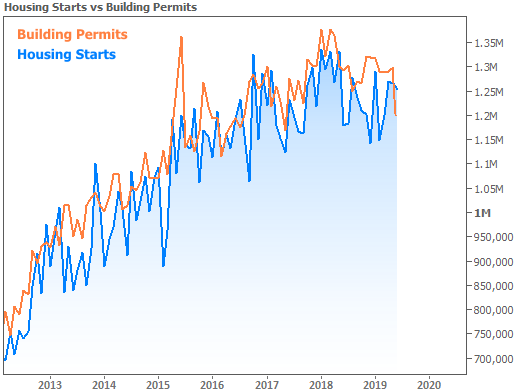 While there was indeed a big drop in this week’s Residential Construction report (for June), the nuances are worth considering.  Most notably, separating single family construction from multi-family reveals the latter to be the only culprit.  In fact, single family permits actually improved in June! 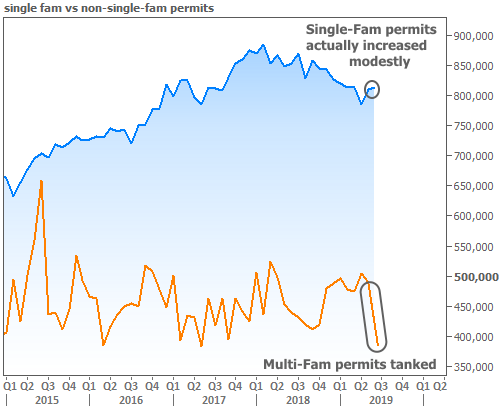 It’s too soon to say if this is indicative of a broader or longer-lasting decline in the multi-family sector as the drop is just inside the range that’s persisted for almost 5 years.  It would be more troubling to see permits break below that range.  Even then, this sector doesn’t historically tell us anything about the broader housing market that isn’t already seen in single-family numbers.

Elsewhere in this week’s housing market data, there wasn’t anything nearly as tricky to sort out.  The National Association of Homebuilders reported an uptick in builder confidence.  And the Mortgage Bankers Association released another solid week of application data.  Strong refi demand makes good sense considering rates are holding near long-term lows.  It’s also refreshing to see purchase applications holding closer to springtime highs compared to the same seasonal “second wind” in 2018. 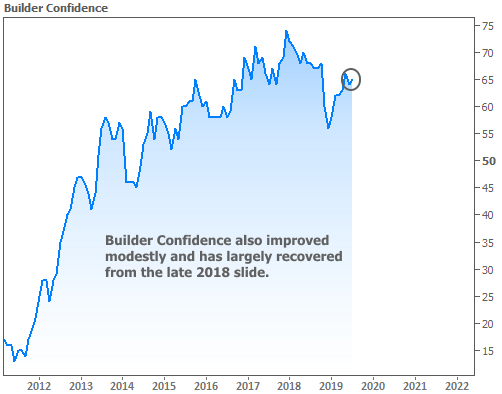 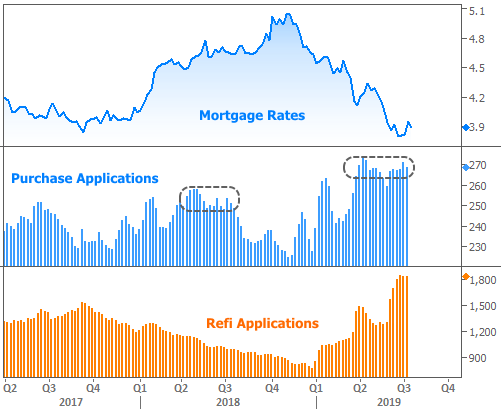 Away from housing, other economic data was even stronger, and that presented a risk for mortgage rates.  Economic data and mortgage rate movement go hand in hand.  A stronger economy puts upward pressure on rates.  A contracting economy helps rates move lower.  While this is far from the only source of inspiration, it’s indirectly linked to other major sources of inspiration (like Fed policy).  Paradoxically, rates managed to move a bit lower this week despite an exceptionally strong economic report.  What’s up with that?

The Philadelphia Federal Reserve district publishes a highly regarded report on the manufacturing outlook each month (dubbed simply “The Philly Fed Survey”).  It crushed expectations on Thursday.  True to form, the bond market weakened at first, thus suggesting higher rates.  But bonds quickly found their footing.  This likely had to do with the fact that last month’s Philly Fed survey was almost equally as weak.  In other words, this month’s big beat mostly served to wash out last month’s big miss.  The same pattern was seen in February and March this year.  Either way, the 4-month moving average smooths the volatility out nicely.  At best, it’s suggesting the late-2018 deceleration in manufacturing may have hit bottom. 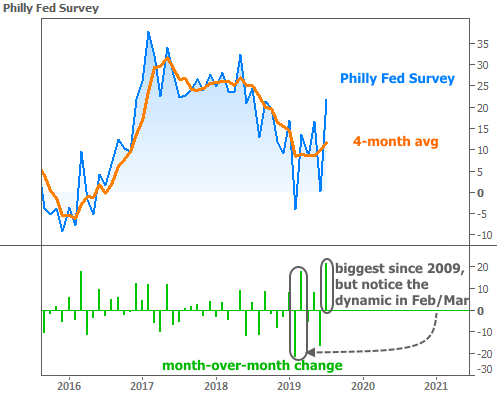 But manufacturing isn’t the only game in town.  On the same day, a member of the Federal Reserve (San Francisco Fed President Williams) shared a few bold comments that some investors took as an indication that the Fed could cut rates by 0.50% at the end of the month as opposed to the 0.25% that is already a foregone conclusion. 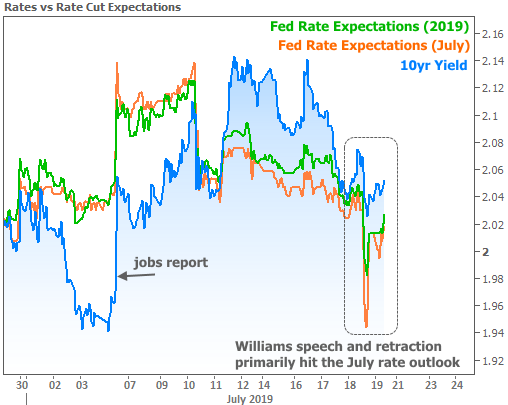 If we change the scaling a bit, we can see things have been fairly calm for 2019’s rate outlook in the past month while investors debate the size of July’s rate cut. 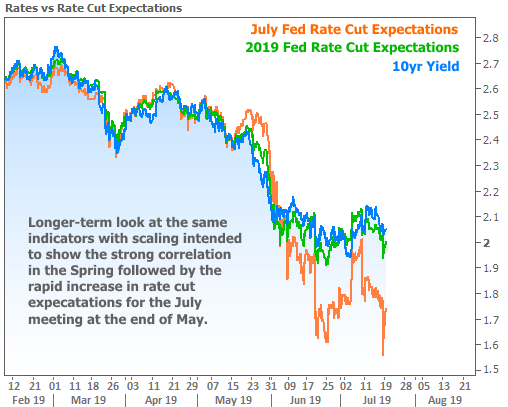 Finally, here are the same indicators with no adjustments for scaling.  Rather, the horizontal lines correspond to certain levels for the Fed Funds Rate.  Bottom line: the market is 100% certain of a 0.25% rate cut on July 31st.  The only debate was whether the Fed might cut by 0.50%.  There’s broader agreement on rates moving another 0.5% lower by the end of the year (likely via 2 more cuts of 0.25% each). 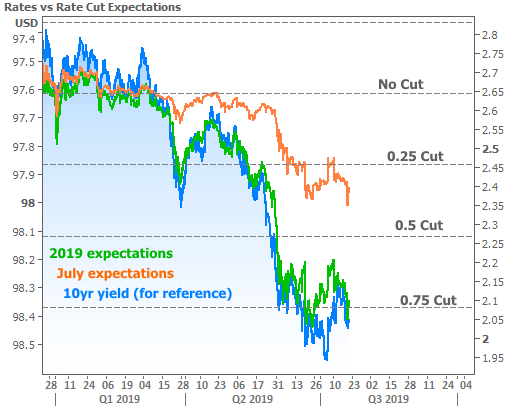 With all the discussion (here and elsewhere) about impending Fed rate cuts, it’s very important to remember that mortgage rates (and pretty much any other rate based on securities that can be traded in real time) have already adjusted for what they think will happen in the future.  They’d be foolish not to.  This concept was discussed in much greater detail in last week’s newsletter.  The takeaway is that the Fed could cut its rate this month and mortgage rates could then move higher.

For now though, rates are biding their time in a range surrounding long-term lows.  The 10yr Treasury yield is the quintessential benchmark for longer-term rates, and a few yield levels can help us gauge the beginning of the next move. 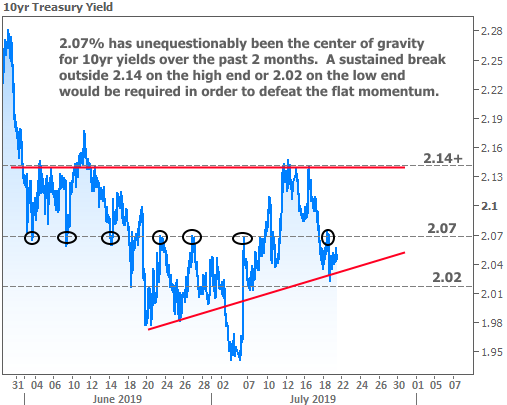