How Coronavirus is Helping Housing

Although there were a few caveats, last week saw one of the biggest jumps in new home construction in more than decade.  Now this week’s data shows existing home sales at their highest in nearly 2 years, and close to highest in more than a decade. Is housing starting to boom again?

The following chart of existing sales helps put things in perspective.  There were multiple months from 2016 through early 2018 where sales were similarly high, and several where they were higher.  The quickest conclusion is that housing is merely getting back to where it was before after taking a year to cool-off a bit in 2018. 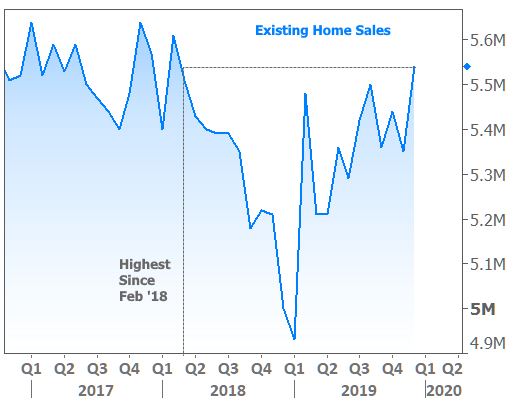 Things may not be that simple, however.  December’s inventory of homes for sale fell to a record low in the same report.  And it’s been near that level for 3 years running.  To whatever extent an absence of inventory is constraining home sales, the housing market could be even stronger than the headlines suggest. 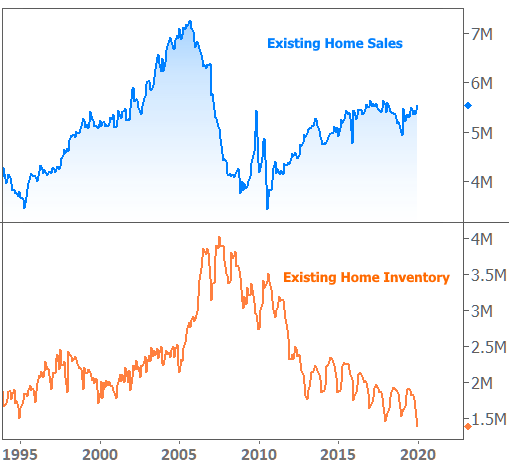 There are several factors driving the strong home sales environment, but one factor that always matters is affordability.  Given that the average home is financed, that makes mortgage rates a key factor in the health of the housing market.

Fortunately, rates are doing a great job of holding a steady range at levels that are not too far from all-time lows. 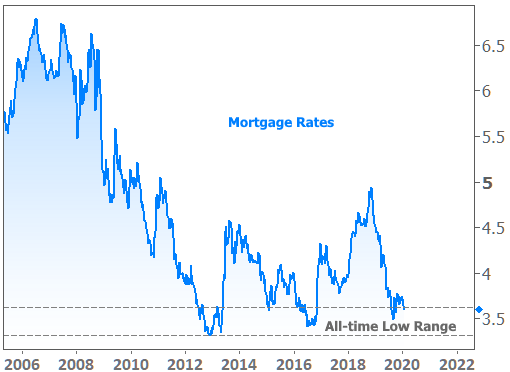 Rates take cues from inflation, the economy, Fed policy, government spending, and headline news among other things.  Assigning credit for today’s low rates or guessing where they’re headed next would involve a qualitative debate.  One thing every market participant can agree on this week, however, is that the coronavirus outbreak in China (aka Wuhan Virus or simply “nCov,” which means it’s a “novel” or previously unseen type of coronavirus) has been clearly connected to lower rate momentum in the short term.

For those who haven’t taken a deep dive into the impact of the Ebola news cycle in 2014 or SARS in the early 2000’s, this might sound like a joke.  It’s not.  Relative to the amount of people killed by SARS, its impact on financial markets was rather extreme, with some pundits crediting it for pushing Hong Kong into a brief recession in mid-2003.

In terms of the impact on interest rates in the US, when the CDC finally announced that SARS was contained, it marked the bottom of a quick move to the lowest rates in a long time. 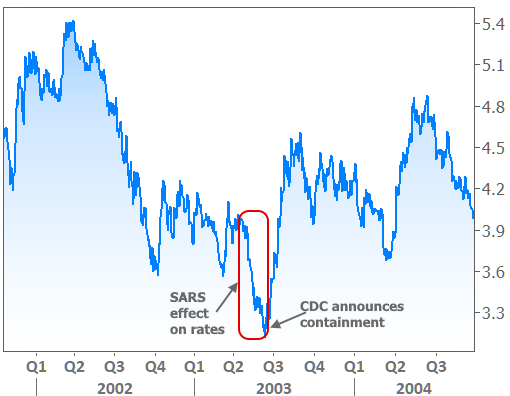 Fast forward to January 2020 and the evolution of the coronavirus news cycle is the defining factor in a rate reversal.  This move began earlier in the month when the identification of the virus put an end to upward momentum in rates.  It then kicked into higher gear mid-month when China confirmed it could spread among humans.  Since then, every major update on incidence and mortality has coincided with another little bump toward lower rates. 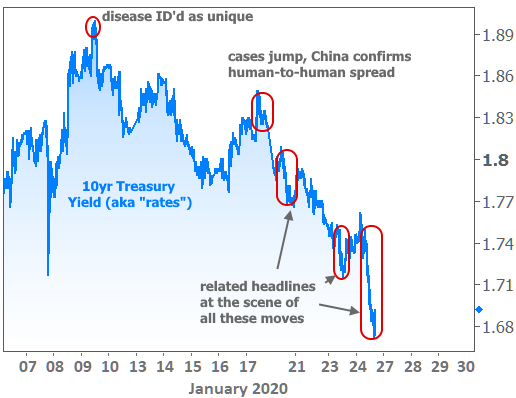 Naturally, the whole world is hoping this outbreak is contained as quickly as possible.  Until then, markets will continue accounting for the uncertainty by buying more bonds, and more bond buying means downward pressure on rates.  Be aware (or even be “warned”) that rates may bounce fairly quickly as soon as it looks like the tide is turning with respect to containment.