This week’s key story was the big spike in interest rates.  Is it something that deserves our attention?  Certainly!  That’s why we give rising rates plenty of attention week after week.  That having been said, is it the end of the world for the housing market?  Certainly not.

In short, rates for mortgages and other long-term debt moved up to the highest levels in roughly 7 years.

Why Did It Happen?

There are short-term and long-term scapegoats.  We’ve talked quite a bit about the long-term factors and they account for most of the move toward higher rates of the past few years.  Think of these as an unfriendly backdrop against which the day-to-day tragedies and comedies play out.  They include:

This week’s short-term backdrop included a Retail Sales report that was roughly in line with expectations.  While this normally wouldn’t cause rates to surge, things are a bit different at the moment because of the headwinds laid out above.

Those headwinds clearly imply rates need to go higher, as long as they stick around for the foreseeable future.  Bond traders are happy to adjust rates to match future realities, but when the future is uncertain, traders have to hold back a bit.  They can’t simply slam rates into high gear and assume everything will go as planned.  By coming in “as-expected,” the Retail Sales report let traders know they could continue adjusting for higher rates in the future.

This week’s rate spike was more abrupt because we happened to be at an important crossroads.  When rates approach and break above a longstanding ceiling (as they did this week, just after Retail Sales), mathematical models tell traders to keep pushing rates in the direction of the break.  This is referred to as “technical” momentum, and it’s always contributing to market movement behind the scenes.

Any Specific Challenges For Mortgage Rates?

Yes!  Rates, in general, are based on trading levels in the bond market.  Mortgage rates, on the other hand, aren’t automatically determined by bonds.  Mortgage LENDERS have the final say.  After all, it’s the lender that is responsible for funding your mortgage and for guaranteeing the availability of a locked rate.  Both of those functions could become more expensive for lenders if volatility increases.

With that in mind, lenders tend to raise rates quickly when benchmark rates (like US Treasury yields) are rising quickly–especially if they’re rising to long-term highs.  Moreover, they tend to be more cautious about moving rates back down.  That means Treasury yields typically improve more than mortgage rates after spikes like the one seen this week.  In fact, in cases where improvements in rates only last a few days, it’s not uncommon to see Treasury yields improve significantly while mortgages barely budge.

Is That “Barely Budging” Thing Going to Happen This Time?

It’s already happening!  10yr Treasury yields fell the better part of0.06% and mortgage rates were lucky if they saw half that.

As to whether or not rates “barely budge” from here on out, remember, everything traders can possibly know about the future is already baked-in to today’s rates.  We can’t know ahead of time if bonds will continue to recover next week.  We can only know that–if they do–mortgage rates are likely to recover by a smaller amount. 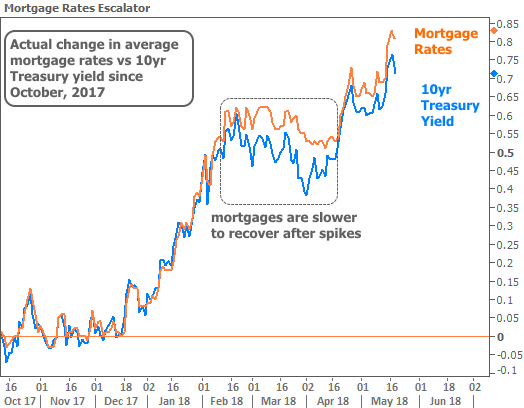 What’s The Fallout So Far?  Will This Affect The Housing Market?

There are always plenty of scary headlines about mortgage rates when they begin rising quickly or when they hit the highest levels in a long time.  As you can well imagine, SOME prospective buyers will make different decisions in a rising rate environment.  But history is clear in showing that a big spike in rates isn’t a deal-breaker in the bigger picture.  The most obvious fallout is always on the refinance side of the mortgage market. 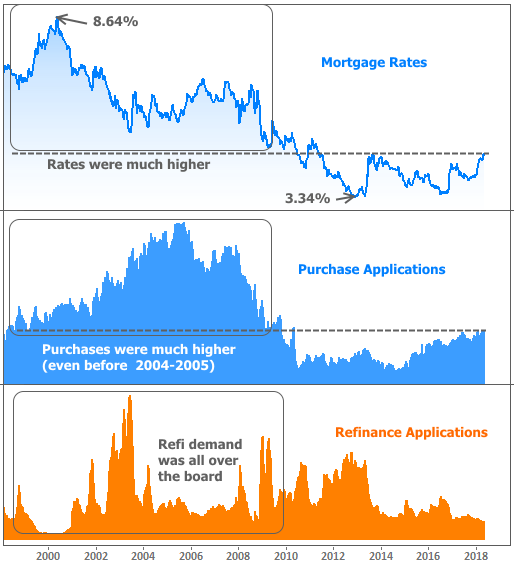 The only exception would be a rate spike so massive that it rivaled that of the early 80’s.  Fortunately, the most pessimistic rate forecasters agree that won’t happen.  But just for the sake of argument, let’s imagine it could.  If it took sales back to the most recent lows as it did in 1982, the modern day equivalent would be roughly 4 million Existing Home Sales per year.  That wouldn’t be the end of the world, even if it wouldn’t be “fun.” 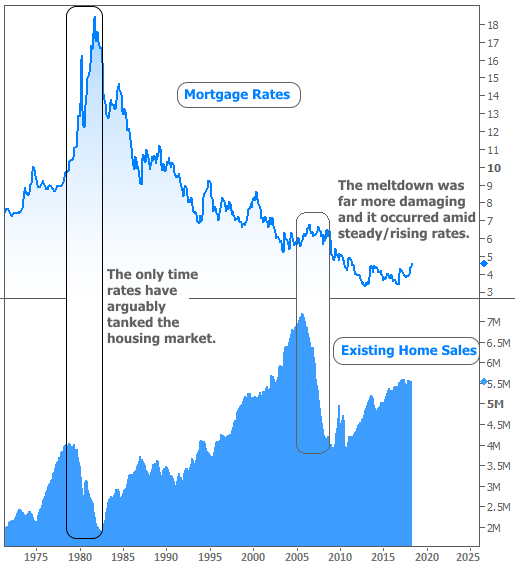 Again though, a 1980’s style rate spike is not in the cards.  Investors know that we have been in a rising rate environment and that it could continue.  While it makes for some short term alarm, and while we expect to see some contraction relative to the previous pace of sales, this week’s housing-related data speaks for itself. 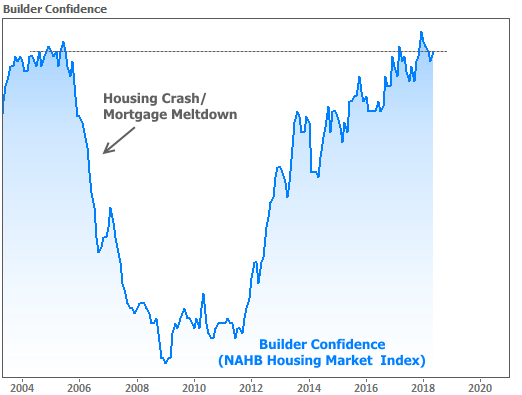 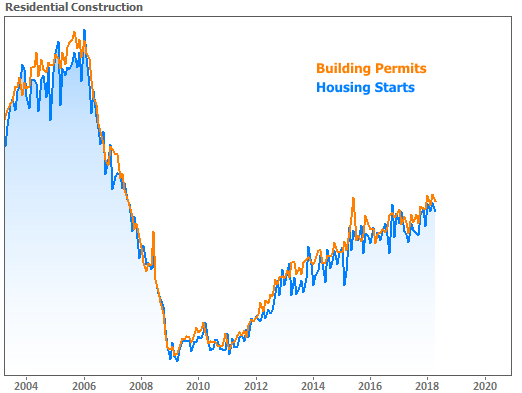