Financial markets went on a fairly wild ride last week as downbeat manufacturing data combined with geopolitical news to lead a reversal in stocks and bonds. The current week brought just as much volatility by Thursday, but Friday took everyone by surprise–at least as far as rates were concerned.

Let’s start by taking a look at the tamer side of the market.  In the current case, that honor goes to stocks.  Notice the initial spike in VIX (a stock-specific volatility gauge) in early May, which resulted from Trump’s tariff announcement on Chinese imports.  The next 2 weeks saw a barrage of trade-related headlines, but the news cycle was noticeably calming through the first half of last week.  Then on May 23rd, volatility returned and stocks moved back to multi-month lows. 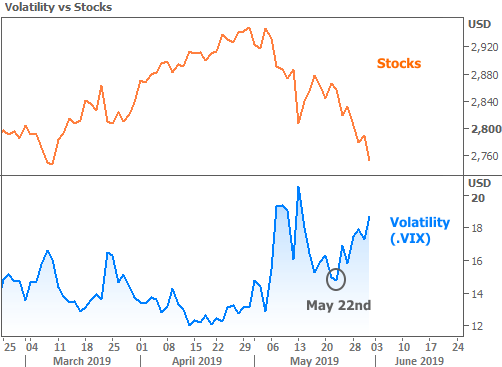 The move in the bond market was even more pronounced.  Whereas stocks surged down to the lowest levels since March, bond yields would have to look much farther back before finding similar levels.  This makes good sense when we consider the major motivations for each side of the market.

Looking at the most basic themes since late 2018, we can divide stock/bond movement into a few sections (as broken out below).  In late 2018, stocks began to swoon due to high rates, a seeming lack of concern from the Fed, and a weaker global growth outlook.  The Fed changed its tune in early 2019, which benefited both stocks and bonds.  It was only after the early May Trump tweets that stocks reversed course and began falling.  Simply put, a friendly Fed and a weak economic outlook is a mixed bag for stocks, but it’s all good for bonds/rates. 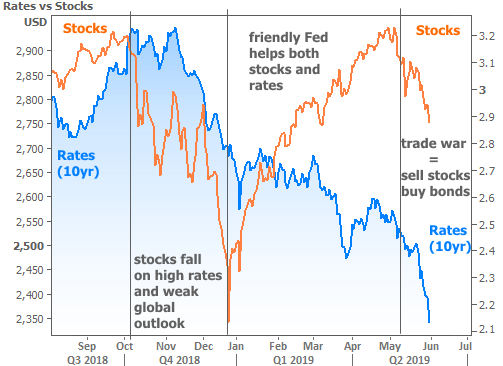 And the market is definitely expecting the Fed to be increasingly friendly.  Those expectations increased sharply on Thursday night when another round of Trump tweets announced new tariffs on Mexican imports.  All told, the trade war narrative can be credited for investors expecting almost 2 additional Fed rate cuts compared to early May.  Those rate expectations go hand in hand with interest rate momentum. 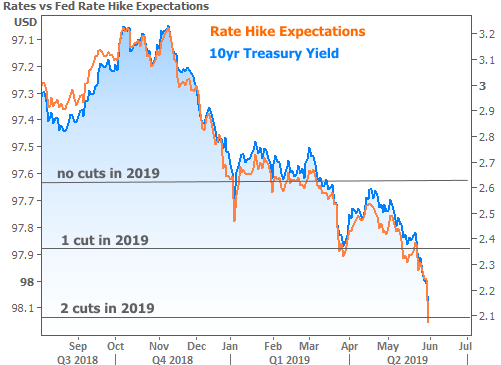 But how well are US Treasuries correlating with mortgage ratesthese days?  The two are normally very well connected, but there’s been quite a divergence recently. 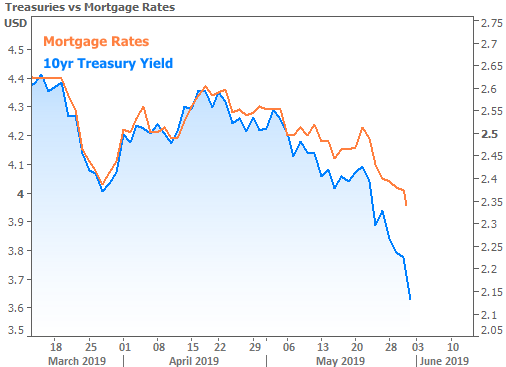 This has been happening for several fairly complicated reasons (e.g. the speed of recent mortgage payoffs had a big negative effect on mortgage bond valuations.  Market volatility spiked at the same time, which only further damaged valuations).  Don’t worry about that esoteric stuff though.  The important thing is that the divergence will likely be temporary.  Even then, mortgage rates were still able to make it back to the lowest levels since late 2017 this week, with top tier 30yr fixed rates officially moving just under 4%! 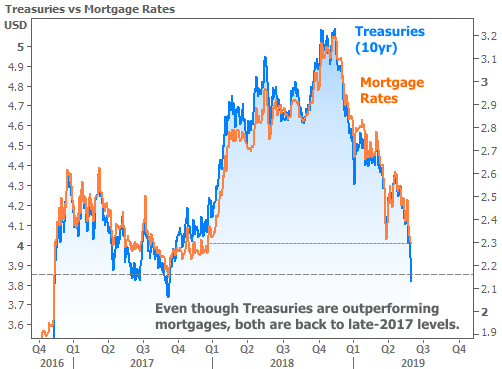 Can the good times keep rolling?  That depends on Trump’s willingness to continue driving hard bargains at the trade negotiation table.  At the very least, unless there’s a surprisingly optimistic announcement in the meantime, the possibility of significant progress is likely on hold until the G20 Summit in late June.  That means the fate of rates may fall back in the hands of economic data.  With that in mind, next week is packed with several of the most important reports we see in any given month.  Adding to the volatile potential is a policy announcement and press conference from the European Central Bank on Thursday morning.